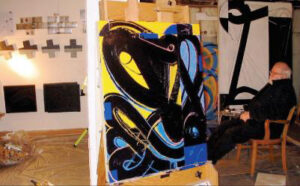 Opening Reception: Friday, April 11
Runs in the Minarovich Gallery until May 18

The diverse pieces in the exhibition have been selected from my professional career that started in the mid-sixties. Although beginning with a figurative print completed during my undergraduate studies at Kutztown University, Pennsylvania, in the spring of 1965, and several drawings and a painting that were made at Haystack Mountain School of Crafts, Maine, during that following summer, the included works focus on my ongoing commitment over many decades to the investigation of abstraction and non-objective issues through a variety of media. Informed by the achievements of early to mid-twentieth century modernisms, I have long aspired to integrate formal, pictorial, and material structures into evocative objects of contemplation that attest to human continuity and contemporary experience.

Ron Shuebrook holds a B.Sc. in art education (1965) and a M.Ed. in art education (1969) from Kutztown University, PA, as well as an MFA from Kent State University, Ohio (1972). Ron studied on scholarships and monitorships at Haystack Mountain School of Crafts, Maine during the summers of 1965 and 1967. He also held a Full Fellowship in Painting from the Fine Arts Work Center, Provincetown, Massachusetts, 1969-70 as well as residences at the Mac Dowell Colony, Peterborough, New Hampshire, and the Triangle Artists Workshop, Pines Plains, New York. He has received numerous awards for his studio work from the Canada Council for the Arts, the Ontario Council for the Arts, and other organizations. He has taught and been an administrator at many institutions in the United States and Canada including Kent State University, the University of Saskatchewan, Acadia University, York University, Nova Scotia College of Art and Design, the Ottawa School of Art, and the University of Guelph. From 1998-99, he served as President of the Universities Art Association of Canada. Shuebrook is also the former President and Vice President, Academic, of the Ontario College of Art and Design, Toronto where he is currently a full Professor of Painting and Drawing. In May 2005, he received an honorary doctorate from OCAD for his contributions to art and higher education in Canada, and on November 10, 2006 he received the 2006 Art Administrator’s Award of Distinction from the National Council of Art Administrators, an affiliated society of the College Art Association.

Shuebrook exhibits his work nationally and internationally. His paintings, drawings, prints, and wall constructions have been acquired by more than 50 public galleries, museums, and corporations such as the National Gallery of Canada, the Art Gallery of Ontario, the Art Gallery of Hamilton, MacDonald Stewart Art Center, the Beaverbrook Art Gallery, the Art Gallery of Nova Scotia, Little Rock Art Center, The Four Seasons, and many others. He is also currently the President of the Royal Canadian Academy of Arts. Shuebrook is represented by Olga Korper Gallery, Toronto, Virginia Christopher Fine Art, Calgary, Galerie D’Este, Montreal, and Studio 21 Fine Art, Halifax, Nova Scotia. His drawings are also handled by the Victoria Monroe Fine Art, Boston, Mass. Currently he lives in Guelph, Ontario and Blandford, Nova Scotia.

Shuebrook has also published catalogue essays for such public galleries as the Dalhousie University Art Gallery, The Macdonald Stewart Art Centre, and the Harbourfront Art Gallery, as well as reviews and articles for such periodicals as Canadianart, Arts, Artsatlantic, Artscribe, Vanguard, and others.