Erin Perry: These Things Are Tired 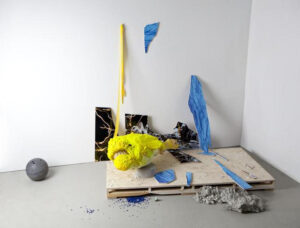 These Things are Tired
Erin Perry

A house sets the stage for some of the most banal and dramatic moments of our lives. Aesthetic and emotional continuities build into a geological experience; the recurring observation of wallpapers, carpets, the aquarium, the number of steps on the stair. Embedded in this visual routine are the seismic moments that alter a person’s awareness in a pivotal instant, as the poet Albert-Birot wrote, “there are angles from which one cannot escape”.

These memorable, disruptive instants are the focus of a new collection of works by Erin Perry. Through association, combination, and exaggeration, she reconstructs these crucial points in time into material re-tellings. Set against the grain of a domestic monotony, her sculptures, drawings, and installations explore the grotesque, the comic, the tragic, the surreal. Perry’s recent work stages a literal commemoration, where she riffs on memento and decorates the basement––a figurine, vigil lights, a hidden mess.
Perry will also be an artist-in-residence while the exhibition is on view enabling her to infiltrate the exhibition during its run.

About the Artist:
Erin Perry was born in Montreal in 1979 and currently has a studio in the Parkdale neighborhood of Toronto.
She received her Bachelors of Fine Arts degree from the Emily Carr University of Art and Design in Vancouver and a MFA in Sculpture from the Rhode Island School of Design in Providence, Rhode Island, USA. Erin has exhibited internationally since 2003 at galleries such as WORK (Brooklyn), LES Gallery (Vancouver), Access (Vancouver), 37A (Portland, Maine) and the Museum of Public Fiction (Los Angeles). Her work was most recently included in The Free Church Issue of The Museum of Public Fiction’s publication series, funded in part by the MoCA Director Jeffrey Deitch. She relocated to Toronto in the fall of 2011 and is currently pursuing a new body of work. http://erinperryartist.blogspot.ca/