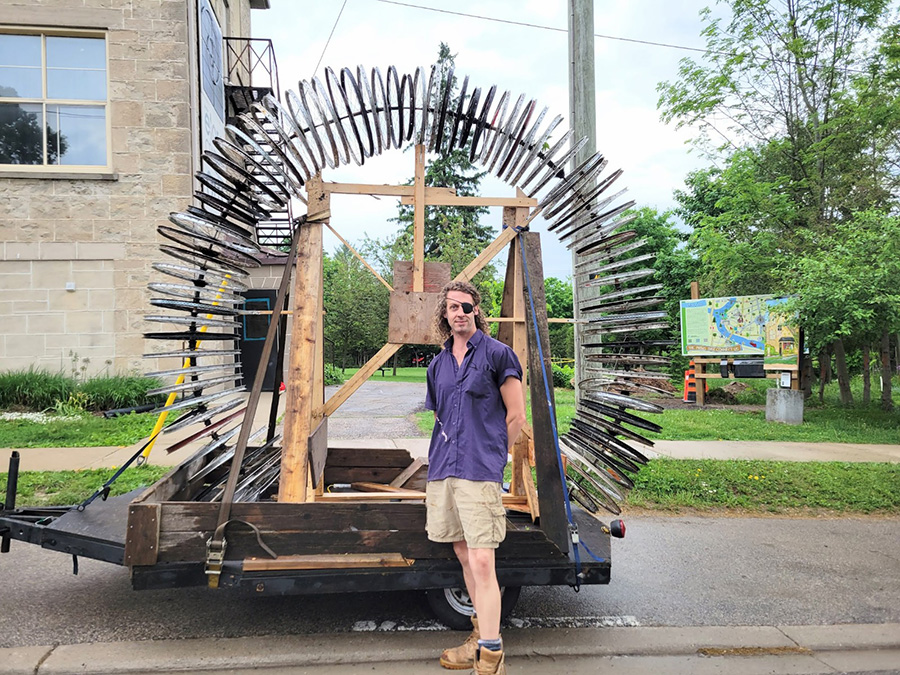 ‘Round & Around’ rises up over the path and back into the ground, giving a Moongate experience. The continuous flow of salvaged materials reminds us of the circular nature of life, and how together, we are greater than the sum of our parts.

The sculpture finds new purpose for detritus and recyclables, objects that have their own history and life cycles. With its
circumference partially buried in the ground, we imagine what
is underneath.

‘Round & Around’ encourages us to reflect the stories and
systems we cannot readily see, to nurture our past, and move forward together. Let’s get out and cycle!

2022
Made of used bicycle rims and steel.

A large circle constructed of salvaged bicycle rims, strung together by a rolled metal rod and anchored to concrete footings, has it’s circumference partially buried. The sculpture rises up over the path and back into the ground giving a Moongate experience. Pedestrians and cyclists following the path can easily pass through the loop of bicycle rims. It provides a great photo location and easily identifiable marker point for visitors to the centre, while also promoting bicycling and the outdoors. 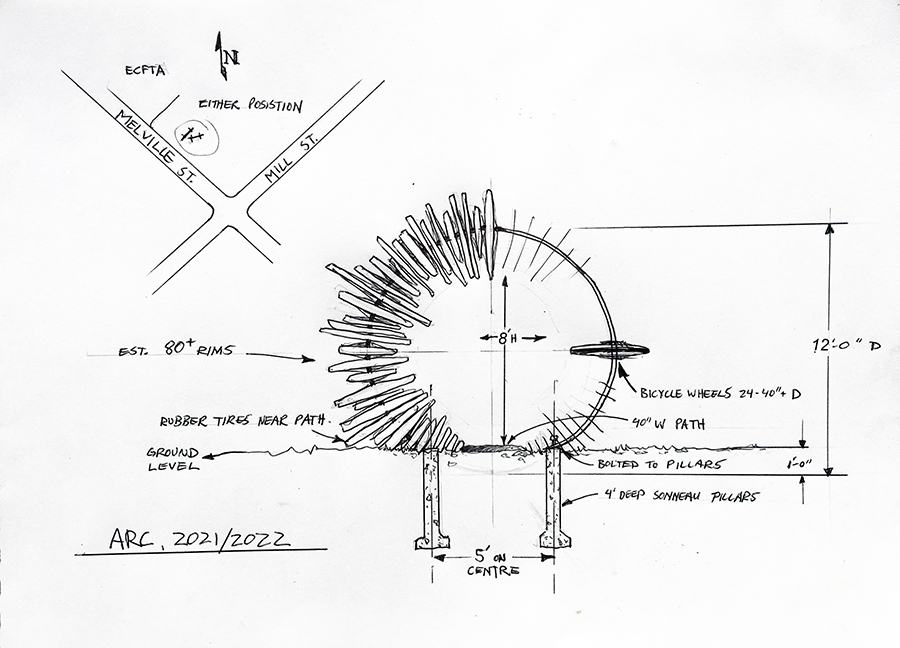 The bicycle rims, contributed by the community, are secured by a centre rod through the hub of the bicycle rim, remain in place but free to spin. I will roll the solid core rod to the specific diameter, then string the rims like beads on a bracelet, washers and welds may be necessary. The bicycle rims will be a various collection of sizes as well as some with rubber tires and some without, which from a distance will give a textured and almost geologic profile. The rims closet to the ground and partially buried will have rubber tires on them permanently inflated and gentler differentiation in size for safety. The ability for the rims to spin provides an opportunity for glow lights and percussion experimentation during promotional events. I see this project as a community collaboration project and a launch-way to inspire further engagement around interconnectedness and coming together for social betterment.

Shown here: Jefferson at work building the frame for his sculpture at his farm near Hillsburg. 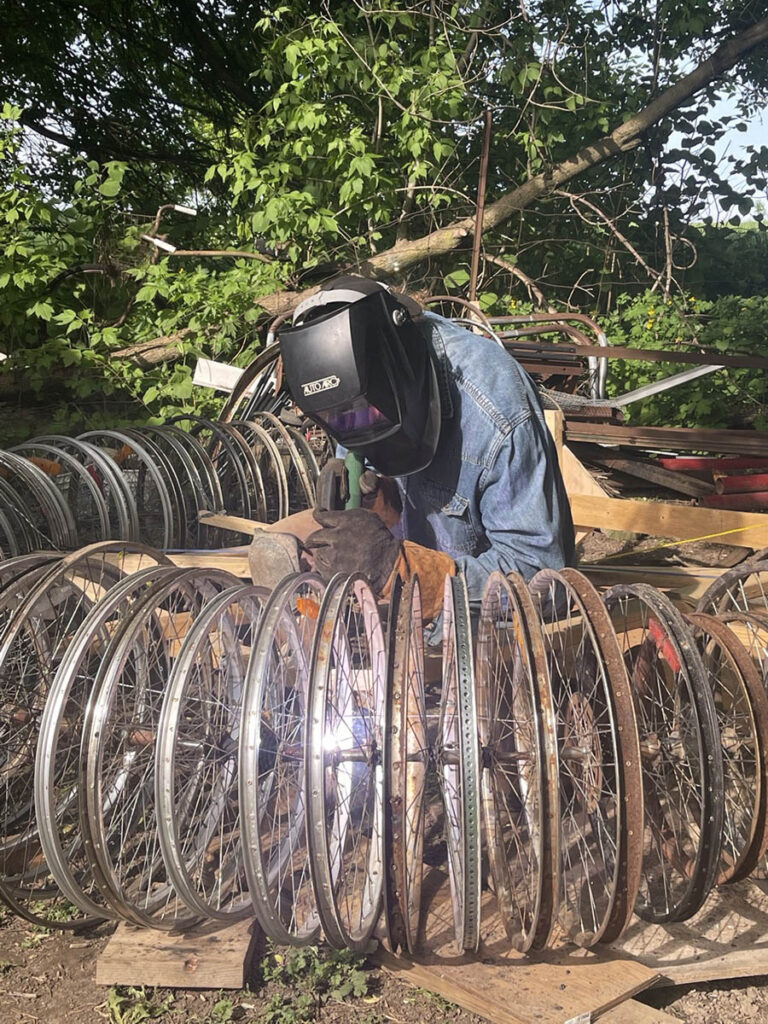 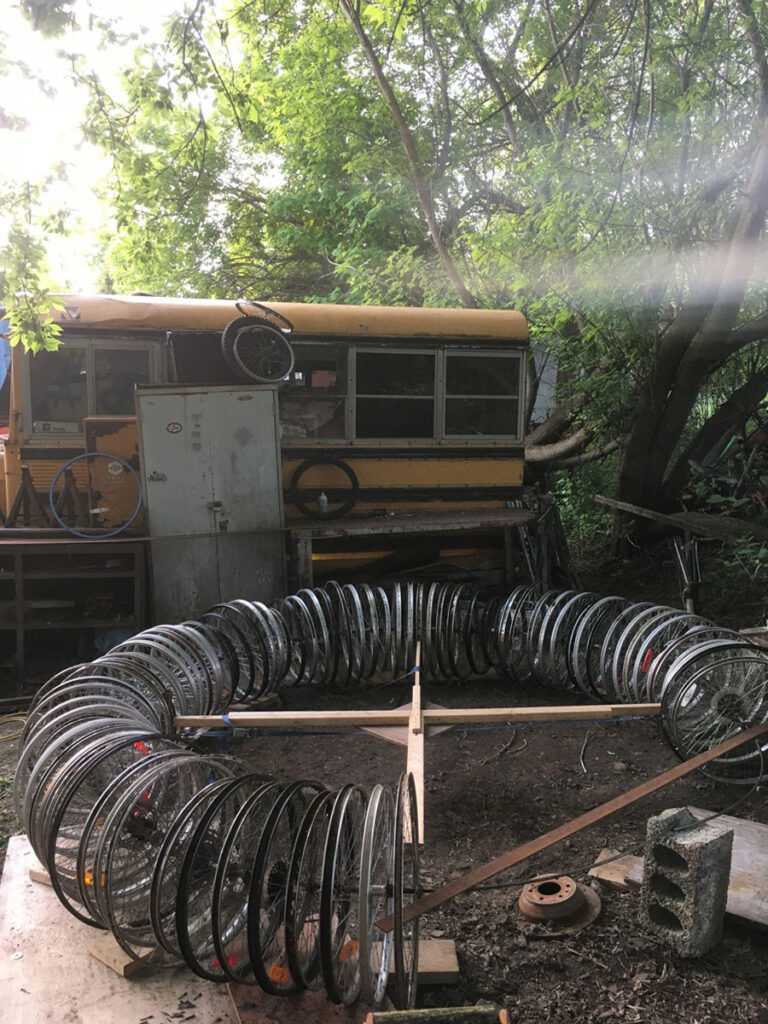 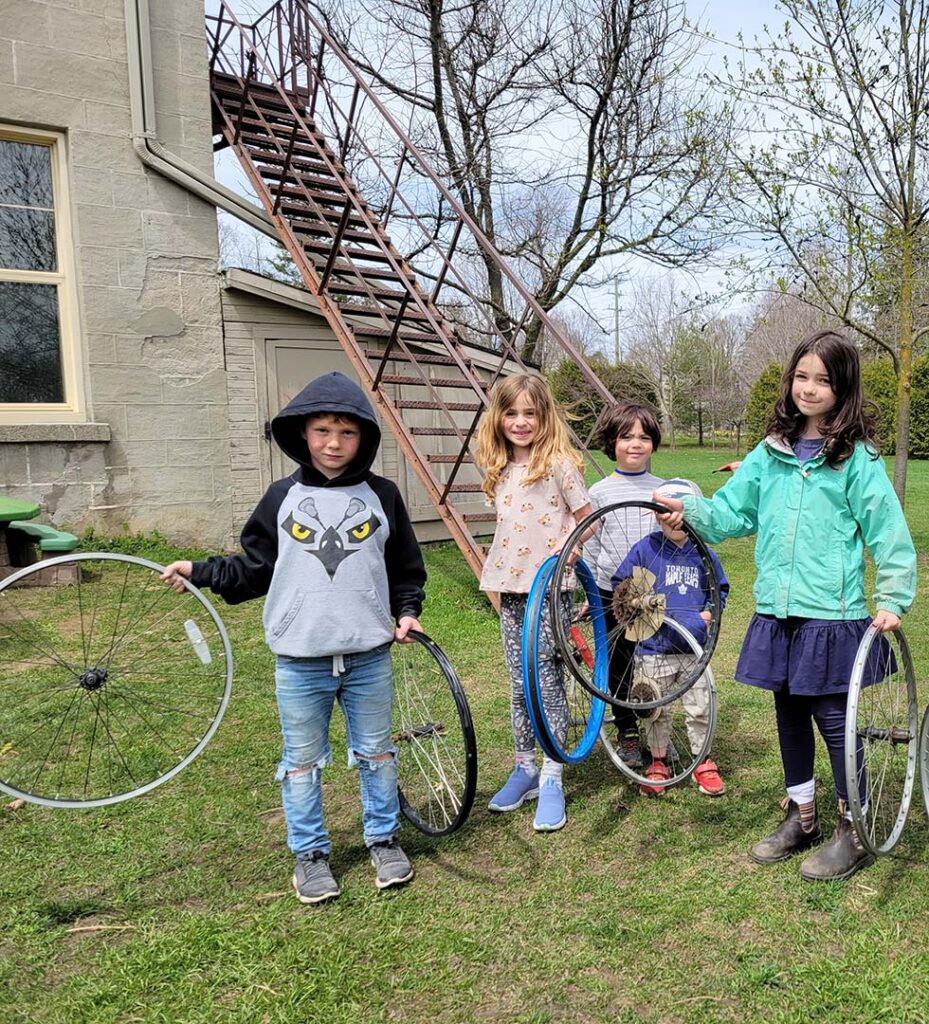 Jefferson’s recycled bike rim sculpture contains 79 bike rims!  We helped him source a number of them for his sculpture, and Green Lanes donated some as well.  The students from the Montessori School of Elora helped load up the rims into Jefferson’s car.

It truly takes a village!

The sculpture is currently back at the workshop for some fine-tuning. Please check back later for more information and behind-the-scenes photos! 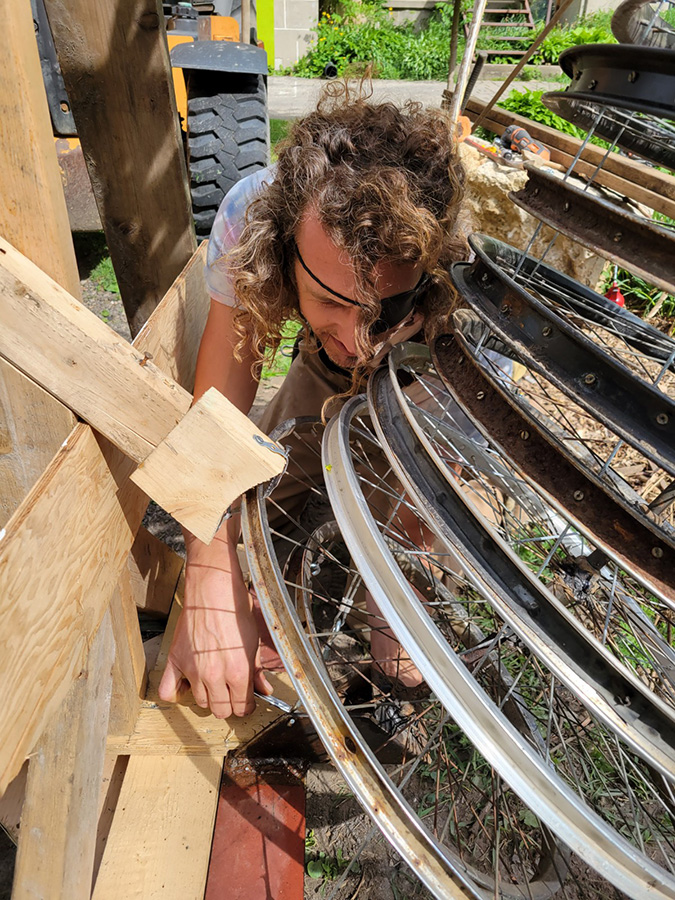 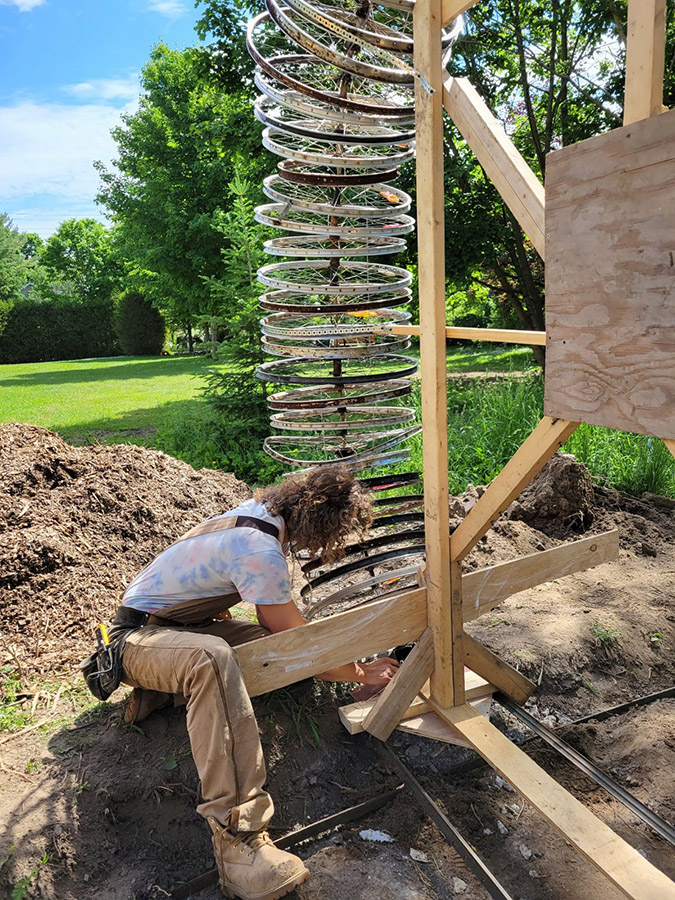 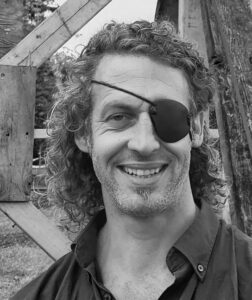 Navigating the complexities of modern life, works are developed from scientific understandings, exploits of industry, agriculture, and transportation, as well from life experiences. Re-interpreting history, cartography, and foreseeable scenarios, brings into focus a deeper connection with the matter and make-up of our surroundings and the impact of this knowledge in shaping our view of life. Could an expression of ‘now’ be the result from the compression of events passed and events yet to come.

Ongoing artistic approaches to people and place, include large-scale public mapping projects, and geology based drawings. Works have included drawings of anticipated infrastructural projects, or have reviewed past railway projects, which caused harm and continue to perpetuate violence of various natures, today and for future generations. Research is a principal methodology to the development of artworks; gravel pit permits may indicate the initiation of new major projects, and the subsidization of certain resources offers a clue into government and corporate plans for yet unknown major infrastructure projects and their measured and pre-censored impacts.

Complimenting this, sculptures constructed of the found, the salvaged, and detritus, reveal processes integral to the concept. Examples include bark sewn to become steel, forest materials a weather cart, corn plants from car parts, and a scale esker on a conveyer-belt of tires. Operational construction equipment (pedal-powered) from tricycles, bicycles, car parts, and other salvage, called Constricycles include a front-end loader and dump truck, a municipal water truck and trailer, and a street sweeper. These people powered machines can transport material and mimic the kinetics of the real things. Performances become integral to this work, allowing for assimilation into labour based social roles such as collecting recycling and street cleaning.

The functional sculptures reflect ingenuity and urgency, amalgamating refuse, utility, and action. They serve as investigations into alternative perceptions into resource management and wealth, while also challenging the role of art, and the artist’s relationship with society.

To find out more about the artist please visit jeffersonsculpture.com

Jefferson Campbell-Cooper is a multidisciplinary artist; his work advocates for social consciousness and is grounded in aspirations for heightened human generosity and awareness. This effort is focused on the mechanisms of our cannibalistic economy, and the extractive behaviors and tendencies of our colonial culture, which drives this artistic practice. Jefferson’s performances and kinetic works has been featured in multiple festival events including Nuit Blanche Toronto, BIG Geneva, Supercrawl Hamilton, Third Shift St. John, and CAFKA Kitchener. His works have been presented nationally and around the world and he has taken part in numerous international residencies and lectures. His works are included in multiple permanent collections. He acquired a MFA from Meadows School of the Arts, Dallas, Texas, and MFA from Nova Scotia College of Art, Halifax, Nova Scotia.