Art in the Family

Concurrent with this show will be an annex exhibit at the
Café Crêperie, 40 Mill Street, West, Elora. 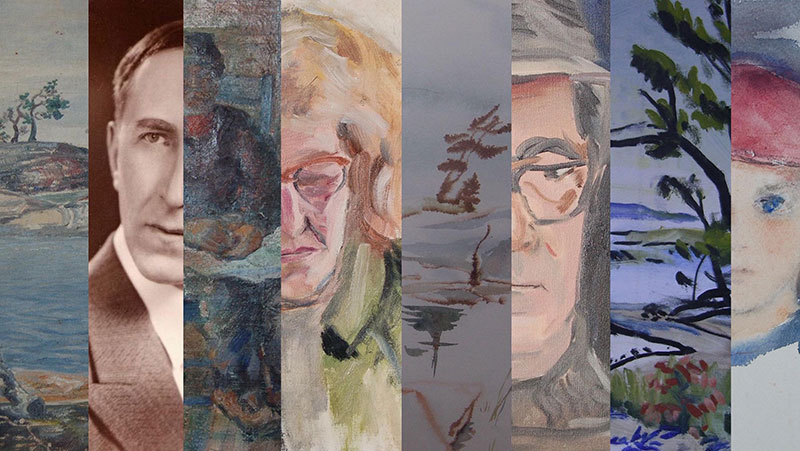 THREE GENERATIONS OF SKOGGARD PAINTERS
This unique art show brings together three artists from a single family.
Viewers will see Precambrian rock, open expanses of water,
and wind-swept pine trees all interpreted by entirely different artistic visions.
The family collection has some of the very same scenes painted by each one of them.

Arvid Skoggard (1886-1950) studied in his native Sweden and in Italy,
and was a contemporary of the Northern Scandinavian School that ignited
the Group of Seven in the early 1900’s. Arvid emigrated to North Amercia in
1923 and by fateful coincidence, ended up painting the very same
Canadian landscape, but in his own distinctive style.

His Canadian daughter-in-law, Jean Mackay Ross Skoggard (1917-2003)
studied and painted among the leading Chinese artists of the Twentieth Century,
Wang Ch’ing-Fang, Hsu Bei-hung, and Ch’I P’ai Shi.
She absorbed the unique Chinese spiritual sense
of negative space, and the grace of the fluid line.

Her son, Ross Skoggard (b. 1949) studied and painted in New York City.
He brings a bold and spontaneous vigour to his landscapes and portraits,
capturing with seeming impossible swiftness and faces, revealing a keen eye to go with the quick hand.

Concurrent with this show will be an annex exhibit at the
Café Crêperie, 40 Mill Street, West, Elora.
Included in this show will be self portraits by Jean and Ross, as well as, portraits that they have created of each other,
and other members of the family, along with photos describing an intriguing family history.