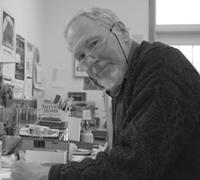 Tony Urquhart is one of Canada’s leading contemporary artists. His paintings, drawings, and unique “boxes” have received major recognition at home and abroad. He’s played a crucial role in the development of contemporary art in Canada – in both his activism for artists’ rights and his distinguished teaching career.

Tony Urquhart was born in 1934 in Niagara Falls, Ontario. In the late 1950s and early 1960s he was recognized as one of Canada’s pioneering abstract artists, having been one of the painters associated with The Isaacs Gallery in Toronto, and later with The Heart of London group (which included Jack Chambers, Greg Curnoe, and Murray Favro.)

Between 1954 and 1958 he attended the Albright Art School in Buffalo. In 1960 he became the first artist-in-residence at the University of Western Ontario, where he subsequently started his teaching career. In 1972 he became a full-time professor of Fine Arts at the University of Waterloo and remained on the faculty for three decades, living with his family in the nearby town of Wellesley, Ontario.

In 1958 he embarked on the first of many annual trips to Europe, where he was attracted to what he called the ‘otherness’ of the visual experience he encountered there. He was particularly drawn to the landscape, architecture and pilgrimage sites, such as Lourdes and Vimy Ridge in France.

Tony has been involved in the illustration of works by his wife, the writer Jane Urquhart, as well as those of Michael Ondaatje, Matt Cohen, Louis Dudek, and Rohinton Mistry.

His work is featured in many important private and public collections, including New York’s Museum of Modern Art; the Victoria and Albert Museum in London, England; the Hirshhorn Collection of the Smithsonian Institution in Washington, D.C.; the Bibliothèque Nationale in Paris; the Museo Civico in Lugano; the Walker Art Center in Minneapolis,’ and the National Gallery of Canada in Ottawa.

He was one of the founders of CAR/FAC (Canadian Artists Representation), that successfully established a fee structure for public museum and gallery exhibitions of contemporary artists. Tony Urquhart was named to the Order of Canada in 1995. He divides his time between Stratford, Ontario and Ireland.

Tony is an avid golfer.