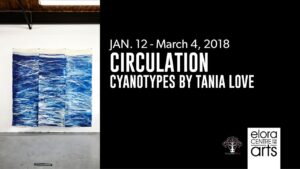 Harris Exchange at the ECFTA

The cyanotype is a 19th century photographic printing process named for its distinctive cyan blue hues. Circulation, a series of largescale cyanotypes by Toronto-based visual artist Tania Love, uses the process to map the cracks in sidewalks and roadways overlaying the Garrison Creek watershed; to bring to the fore both the intersecting language of and conflict between human made and natural systems. Love’s work calls forth the primacy of water and invites contemplation on the metaphor of circulation. Circulation runs through March 4th in the Harris Exchange. Creative Direction Bear Epp & Micaela Campbell