Gillian Iles
Brief Moments of Clarity and other Side Effects 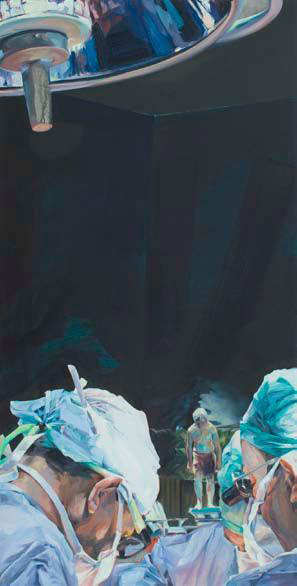 The paintings of Gillian Iles draw you immediately into charged narrative spaces, where the characters and the painterly decisiveness defy your expectations. A celebrated figurative painter, Iles’ process is both historically informed (with sensitivity to the flesh rendering power of oil paint) and rough hewn (with bold painterly marks and visible charcoal underdrawing). This visual skill is harnessed to explore tensions between people’s private and public personas.

Her work questions how the media manufactures and presents “events” to control public interpretation, suppressing nuances of personal experience and perspective. This exhibition draws from the series Part Of, which challenges the media’s choice of subject. Each painting captures a singular moment during an event, employing pre-existing group photographs as source material. The paintings reinvent those sources to pull focus away from the main actors and emphasize the spaces between them. Through unsettling pictorial strategies, such as radical cropping, the centre of meaning moves away from distinct characters and gestures. A second story emerges from the background details, challenging the significance of the media’s main event.
The viewer is attracted and challenged, drawn into a puzzle of competing narratives and meanings. The media’s “party line” is fractured as individual subjectivity and the gaps in the story are given room to be seen. Gillian Iles’ visual and conceptual wit immerses us in the pleasure of interpreting anew.

Gillian Iles is a Toronto-based artist who exhibits locally and internationally in commercial and artist-run galleries. She has exhibited in cities such as New York, Brooklyn, Chicago, Miami, Montreal and Toronto. She has exhibited with Katharine Mulherin Gallery, curator Mia Nielsen and Torres-Porcelli Gallery. Gillian, as a founding member, participated in the creation of two co-operative artist-run galleries in Toronto – Propeller and Loop Galleries. Her work has been highlighted in Mix Magazine, Toronto Life Magazine, Now Magazine as well as the National Post, The Globe and Mail and Now Magazine. Recently, her solo exhibition at Propeller Gallery was included in The Top 10 Exhibitions of 2008 by David Balzer (Eye Weekly). She is featured in the book Carte Blanche Volume 2: Painting that surveys the current state of painting in Canada. Gillian is part of Blunt Collective, which is a group of artists investigating the role of representation and narrative in painting. Gillian is currently teaching at the Ontario College of Art and Design, Sheridan College and the Toronto School of Art.