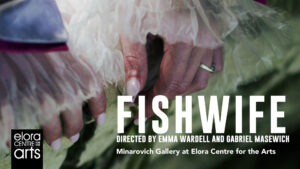 Opening Premiere is Thursday November 21 from 7-9PM in the gallery.  From November 22-24  the film will run on loop in the gallery (in case you missed the opening night). Also on display will be costumes featured in the film.

Fishwife is a experimental film rooted in concepts of witchcraft and the historical portrayal of feminine power.  Spoken word elements direct our progress through the story as we follow two iconic female characters, Eve and Lilith. The story world uses natural landscapes to immerse the viewer in an older time. The costume design was inspired by historical period pieces, yet take on a modern life in the film; mixing old fashioned gowns with contemporary textures. The design of these costumes progresses alongside each of the characters giving more details into each of their personalities. The work grips the audience is suspenseful editing and sound mixing while running at around 10 minutes.  Fishwife was filmed entirely in Centre Wellington and showcases some familiar locations in a new dark story.

A Sero Studio Production, with appreciation to the Centre Wellington Community Foundation and the Elora Centre for the Arts.