Evita Schvallbe: The Dance of Form and Emptiness 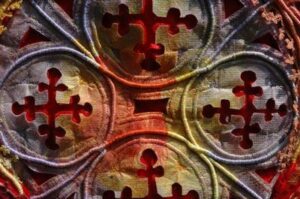 Evita Schvallbe – The Dance of Form and Emptiness

Evita Schvallbe presents a cycle of inter-related textile works. Sculptural in their textured relief, and dazzlingly vivid in their painterly colour, these works awaken both body and spirit. Each of the pieces develops imagery of the elements — wind, earth, fire, and water — into a mandala structure that combines Buddhist, Christian and Hindu symbology. The work on display represents a decade of study, design, and skillful labour. Every piece is painstakingly hand sewn and takes over five weeks to complete. 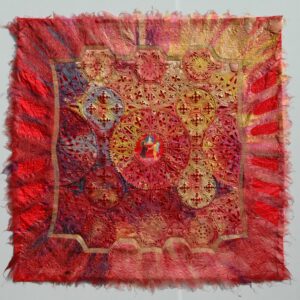 Evita grew up in the historic city of Wroclaw, Poland. She traveled widely, absorbing the rich artistic heritage of Europe, Singapore, India and Malaysia – their cities, villages and natural landscapes – supporting herself as a visual artist by creating wearable textiles, jewelry, ink drawings, oil paintings, painting murals, and designing interiors. In 1982 she graduated with an MSc in Architecture from the Wroclaw Polytechnic Institute. Choosing not to accept an offer to pursue a career in the academy, she continued developing her own reputation as an artist, represented by the independent Polish gallery “Galera”. Her works were shown and collected throughout Poland, Germany and France.

In 1985 she gave up art production to immerse herself in spiritual practice following the Buddhist path. In 1991 she married and moved to the countryside near the village of Acton, Ontario, where she began a ten-year career as a Shiatsu therapist.

Evita met Susan Schantz in 1994, who shared her knowledge of Mennonite quilting techniques. This was the catalyst that turned Evita’s focus back to creating textile art. Working fulltime in her studio, she continues to create fibre artworks that reflect a lifetime of inspiration. Evita’s textile art has been exhibited across Canada and the USA.