A Magical Christmas: An evening of live jazz and singing

A Magical Christmas in the gallery at the Elora Centre for the Arts! | Live jazz and beautiful singing featuring music from It’s A Charlie Brown Christmas and your favourite holiday songs!

In the main gallery at the Elora Centre for the Arts, 75 Melville Street, Elora.  Proof of vaccination and ID at the door.  Masks must be worn at all times.

For program inquiries, please email mikepelletier@rogers.com
Purchase your tickets below!!  If you encounter any ticket sales issues please email admin@ecfta 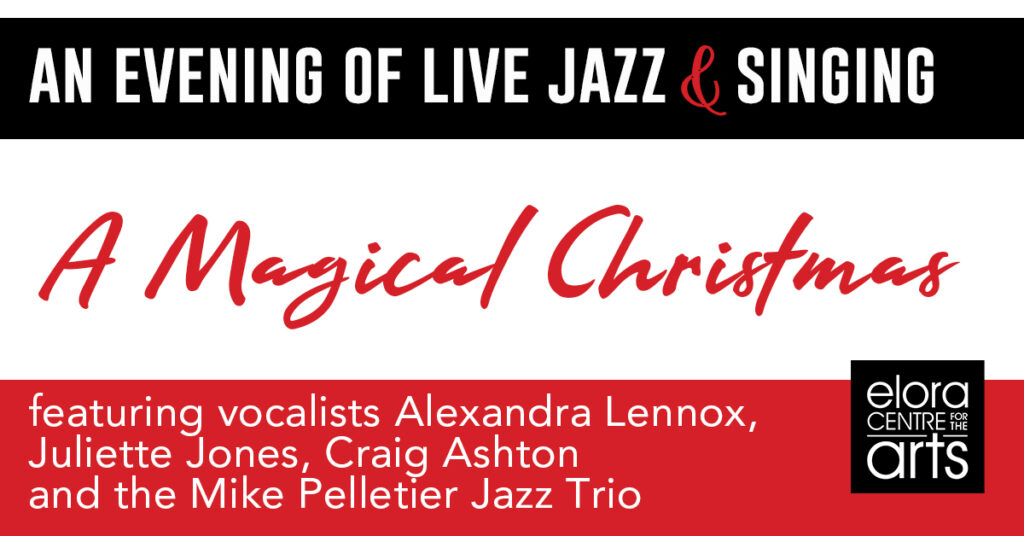 Soprano Alexandra Lennox  has been performing with the Canadian Opera Company in Toronto for 24 seasons singing well over 150 productions in small roles, understudying larger roles and as a full time member of the professional Chorus. Alexandra has a Vocal Performance diploma from the Royal Conservatory of music Glen Gould School, a Vocal Performance BMus from the University of Toronto,  and an ARCT in Voice from the Royal Conservatory of Music. A versatile singer, dancer, actor Ms. Lennox has won voice competitions and sung in television commercials for Shoppers Drug Mart, Miller Beer, Nescafe Coffee and Kraft Dressing. Operatic roles include; “Adele” in Die Fledermaus with TOT and Mississauga Opera,  “Serpina” in La Serva Padrona with Barrie Opera, “Musetta” in La Boheme with Co-Opera, “Nellie” in Leo the Royal Cadet With TOT, “The Voice” in Facing South with Tapestry,  “Apparition” in Macbeth with COC, “Strawberry Seller” in Death in Venice with COC and “The Cousin” in Madama Butterfly with COC, and “soprano soloist” in The Nightingale with COC. Ms. Lennox has performed in musical theatre productions; as “Anne” in Anne of Green Gables, “ Hodel” in Fiddler on the Roof, “Liesl” in Sound of Music and many small and ensemble roles as both a singer, actor and a dancer. Alexandra is a busy and sought after festival adjudicator. She has judged voice and choral classes at Pickering GTA Music Festival, Kiwanis Festival of Sudbury, Kingston Kiwanis Festival, Peel Music Festival, Arcadia Academy of Music Musicfest and Miriam Academy of music’s Music Festival.

Juliette Alex Jones is an Ontario based composer & music director with a strong background in musical theatre and classical training. After graduating from Sheridan College’s Honours Bachelor of Music Theatre Performance program, Juliette went on to compose and music direct for multiple companies, festivals, and clients across the GTA including The Musical Stage Co., YES Theatre, Dandelion Theatre, Nightwood Theatre, and more. During the COVID-19 Pandemic, Juliette found work as music assistant on the Netflix Adaptation of 13: The Musical by Jason Robert Brown where she worked alongside Broadway music directors Georgia Stitt and Lily Ling as well as Jason Robert Brown himself.

Juliette started her music direction career while studying in college as the associate music director for The Threepenny Opera where she played, conducted and arranged the show for a hodgepodge group of instruments played by the cast themselves. Promptly after the run of the show was finished, Juliette was asked to music direct for Bravo Academy’s summer programs as well as for their regular season of advanced theatre troupe shows. Juliette also orchestrated and arranged Best of Hamilton Fringe’s show A Time of Future Tales and music directed Heresey for Paprika Festival and Last Year; One Year Later for Buddies in Bad Times Theatre. In her first year out of college, Juliette returned to Sheridan as a voice teacher for the Preparatory Arts Diploma program and substitute taught vocal ensemble and vocal tech for George Brown Dance. Juliette also taught piano and voice for Bravo Academy and out of her own home studio.

During her first stint of music direction in the GTA, Juliette composed Flightpath for YES Theatre alongside theatre writing partner Griffin Hewitt and had the opportunity to have her first original show Peas, Patrick & Parker produced for a 1 night reading at Buddies in Bad Times Theatre. Juliette also wrote the music for The Hands of Hypatia at Dandelion Theatre and wrote for Make Me A Song, an educational initiative set up by The Musical Stage Co. Juliette is currently enrolled in the Scoring for Screen and Stage program at Sheridan College.

Craig Ashton is no stranger to the limelight of the stage. Craig was raised in Fergus, Ontario and spent many years singing with the Elora Festival Singers and as a chorister at St. Johns Anglican Church. His professional operatic career started when he was twenty-four years of age. A finalist in the Canadian Opera Company’s (COC) Young Mozart Singers’ Competition he was accepted into the prestigious COC Ensemble Studio under the direction and guidance of Richard Bradshaw. Craig has performed leading roles in eminent productions by the COC, Toronto Opera in Concert, Toronto Operetta Theatre, The Banff Festival, Edmonton Opera and Vancouver Opera, to name a few. In musical theatre his greatest triumphs are The Gondoliers at the Stratford Festival, and Hal Prince’s The Phantom of the Opera and Show Boat. He was also a member of the original Canadian Tenors. Craig has received acclaim for his production of From Opera to Broadway at the Historic Gayety Theatre in Collingwood and Meaford Hall and A Collingwood Christmas at The Historic Gayety Theatre in Collingwood. He is very excited to be close to his hometown performing with this amazing group of musicians.

Mike Pelletier is a Bassist/Composer/Arranger and has been a part of the Toronto music community for over 25 years. Graduating with honuors from the prestigious Humber College Jazz Performance program, Mike’s post secondary education also included part time classes in Jazz Performance at the University of Toronto and York University.

During his post-secondary years, Mike had the privilege of studying with a selection the finest jazz bassists in the world including Don Thompson, Neil Swainson, Dave Young and the legendary Ray Brown.