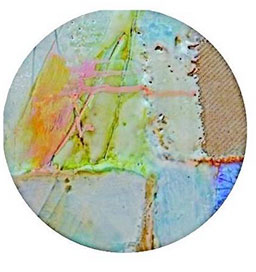 CIRCLING THE CONFLUENCE: an exploration around the elora gorge

Showing in the Minarovich Gallery, Elora Centre for the Arts
75 Melville Street, Elora, ON N0B 1S0
October 6 – November 6, 2011
Join us for the opening reception and talk: Thursday, Oct 6th from 7:30pm.

Inspired by the beauty of Elora and the surrounding area, the confluence of the Irvine and Grand Rivers was chosen as the starting point for this exhibition. From that center point, a 1km circle was mapped out, one that takes in both wild and tamed places. Empty lots, streams, a neighbourhood, the conservation area… each has its own sense of beauty, elements of which are represented in abstract encaustic paintings. Found objects were married into the work, as were collage and a variety of mixed media. A key building block of the gallery installations, are ‘tornado branches’ gathered from downed cedar trees. These branches are weathered by time and generously given by local landowners, and now take on new life, as they weave through the exhibition.

Andrea and Daniel are partners in life as well as art – living rurally in Wellington County with their family. Andrea’s primary medium is encaustic (painting with hardened beeswax and oil pigment) while Daniel sculpts with natural elements, using branches and stone in this case. For this project, they have collaborated on both the wall pieces and the sculptures, treading into new territory together. Over the past decade, they have worked together on various projects and exhibits, with this being the most ambitious and collaborative yet.

Read the Artist Thank You here.

The idea for ‘Circling the Confluence’ has been germinating for a few years. Research and collecting elements for the show began in January of 2011. The branches were taken from nearby tracts of land that were literally flattened by the 2005 tornado, and will be transformed into four sculptures that reflect the rivers and the convergence of the rivers, as well as the tornado itself.

The eight wall paintings that surround these installations represent various locations on the circle around the confluence, each with its own sense of place and essence. Andrea and Daniel are thrilled to have worked on a project of this scale, and have fallen in love with Elora again in the process.