Brandon Vickerd: The darkness between the stars …. 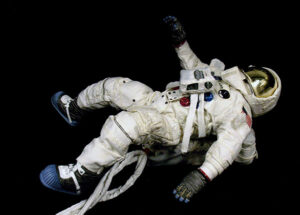 The darkness between the stars ….

The darkness between the stars …. is an installation that deconstructs the contemplative gallery through construing it as a three dimensional film still, allowing the viewer to enter the space of an image. The goal is to play on the audience’s familiarity with pop culture film imagery in order to dis-arm the intellectual detachment that galleries normally incite.

In the gallery will be an astronaut in full space walk gear, floating in a prostate position three feet above the floor as if defying the gravity that the viewer is subject to. The walls of the gallery will be painted a deep blue/black, obliterating any sense of depth, creating a limitless space and enhancing the feeling of weightlessness. The dark tones of the walls reference a film still, framing the central point of action – the floating astronaut.

The astronaut suit will be constructed of synthetic polymers and plastic components, giving the appearance that it is an authentic, functioning suit. The polarized visor of the helmet will be open slightly so that the viewer can peer inside the helmet to see the skeletal remains of a long dead spaceman The astronaut body will be made from light weight material (foam) and supported by the broken life line that stretches from its back pack and bounces off the floor, the lightweight construction of the figure allowing the life line to provide enough support so that the figure appears to be floating.

The image of the dead astronaut is a cross-fertilization of different sources. It has been partially influenced by recent publication of de-classified Russian reports about the number of cosmonauts who died during the space race of the 1960s; Russia and the US had lost over a dozen men trying to beat each other to the moon, but minimized or out right denied the tragic events at the time. The idea that these spacemen were heroic in life, but forgotten in death embodies a distinctly modernistic pursuit of progress, a sense of constantly striving forward and discarding the failures of the past. The sculpture also references the cover illustration of dime store science fiction novels of the 1960’s as well as countless Hollywood films where the image of an astronaut a drift in space is meant to symbolize a journey into the abyss. Such imagery abounds in classic sci-fi films, such 2001 Space Odyssey, as well as contemporary blockbuster such as Armageddon, not to mention other forms of popular culture, such as David Bowie’s 1969 “Space Oddity” (Major Tom song).

These pop culture references are important to constructing the meaning and significance for the viewer, but the installation is ultimately about the failure of the project of modernity. Despite all the lofty goals of unending progress and technological mastery, modernity still resulted in our heroes dying alone, floating in the cold empty expanse of space or burning to death in the oxygen enriched atmospheres of tin space capsules orbiting the earth. The fact that this narrative is re-occurring in popular iconography suggests a collective fascination with the darker side of our mythologizing of the heroic nature of scientific progress. The darkness between the stars… is an installation intended to suggest the death of any romanticized future predicated on the boundless opportunities of scientific discovery. The work does not detail any one historic event of astronauts being lost in space, but encapsulates a cultural fascination with an image of man staring into the empty abyss while being surrounded by the technological devices birthed of modernism. It presents the quintessential juxtaposition of the modern age, although assisted and supported by technology, the hero ultimately faces the limitless darkness of space alone.

This work is a re-visioning of an early piece of mine titled Dead Astronaut (2008), which was a monumental figurative work featuring a skeleton in an astronaut suit carved from poplar wood. Whereas Dead Astronaut addressed ideas of the monument and materiality, The darkness between the stars …. is engaged with constructing a narrative, as opposed too investigating the idea of sculpture and process. There is a lineage and the ideas are similar, but the execution and concepts for the work are starkly different.