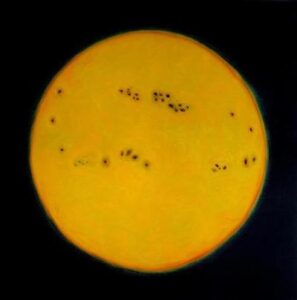 Marking a new direction in David Blatherwick’s work, Maximum Sun explores a line of inquiry initiated in the Dominican Republic, a second home for the artist and his family. In the Dominican, crops thrive under a forest canopy that shades them from the tropical sun; in neighbouring Haiti, blighted by deforestation, many crops burn to a crisp. In Maximum Sun, two images of the solar surface lead to a collection of spare abstractions.

David Blatherwick is an artist living in Elora and teaching at the University of Waterloo. He has exhibited at the Musée des Beaux Arts du Québec, Stock 20 in Tai Chung, Taiwan, La Cité Internationale in Paris, The Mattress Factory in Pittsburgh, Art Gallery of Windsor, the Robert McLaughlin Gallery in Oshawa, and is represented by Paul Kuhn Gallery in Calgary and Art Mur in Montreal.